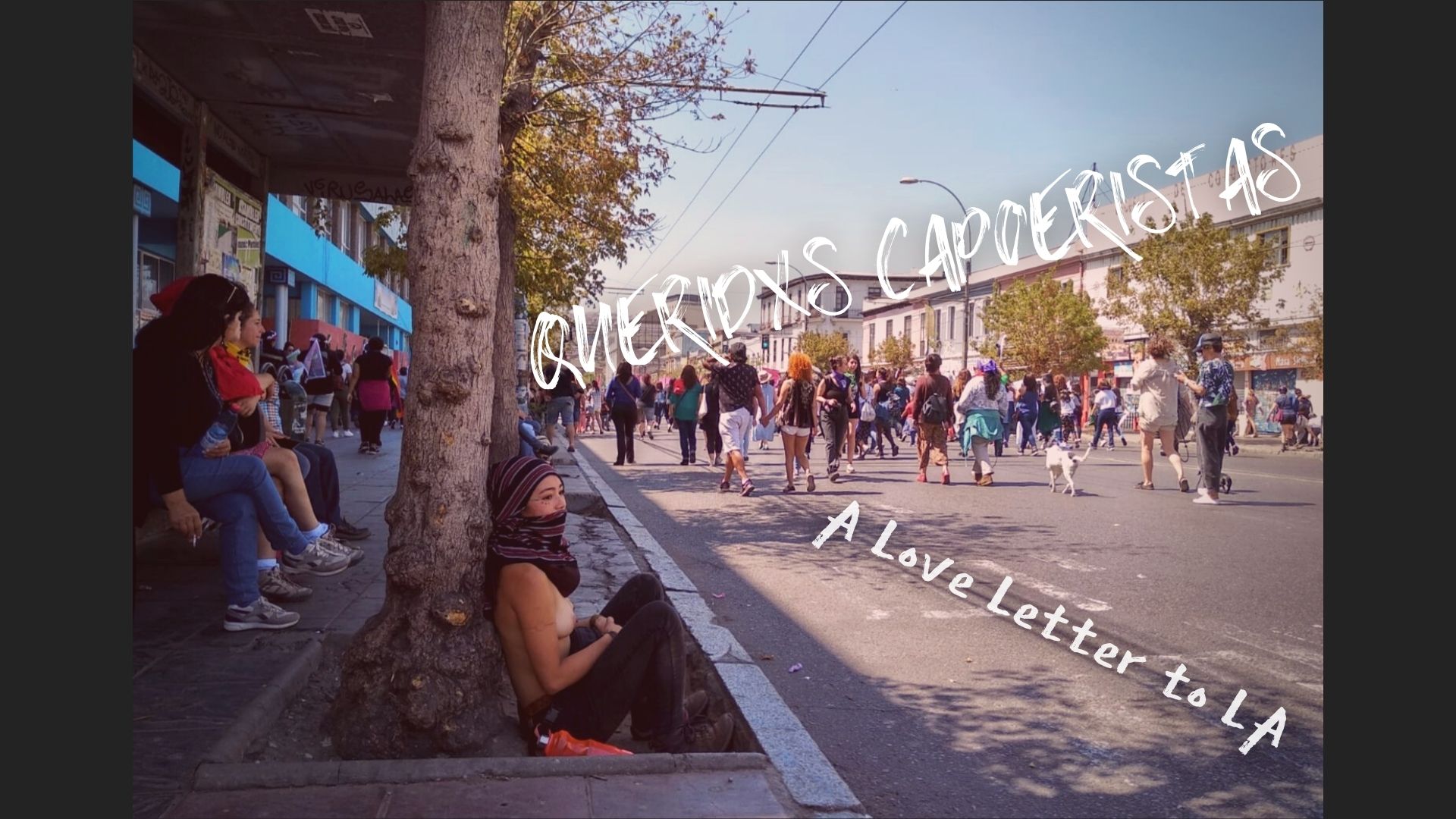 During my first class of capoeira, Chegado told me that capoeira is many things to many people—an art form, a dance, a martial art—but he likes to think of it as a metaphor. For life. You take all the grace, grit, cunning, comradery, discipline, joy, and strength that a good life requires of you, and you condense them into one moment: you squatting hand in hand with your opponent, surrounded by the warm, watching bodies of your compañerxs, anointed by the drum and berimbau, and you look into your opponent’s eyes and see Trust, pure and simple, telling you, I will give you my utmost because I respect you, because you are worthy of receiving my best, and in that moment, your goodness is restored just as Life whirls you upside down and lands you in the roda.

The first time I witnessed a roda was in a rainy alley of Valparaíso, on one of those eternal noches de bohemia that only that city knows how to spin. It was past 1 am, I had decided on a whim to sprint down and up the hills for the sheer joy of running on a rainy night, and when I skidded down the steep street where the grungy jugglers and fire dancers hang, I heard drums. A crowd humming. A knot of backs so thick I could not see what they were watching, what they were protecting. I pressed through until I was facing the inner circle—pairs of men and women rolling, tumbling, lunging, exulting. In perfect control of their bodies. In synch, never hurting the other. They ended their fierce games with a kiss to the cheek and a hearty abrazo, melding into the singers and drummers as another pair rolled into the roda.

When I remember that circle of bodies, I remember it glowing as if lit by firelight, though it must have been streetlight. Yet fire was at the center of that roda, warming and illuminating us all.

A year later, I came home to L.A. for a few months’ visit, and decided to enroll at your school. I did not come because I wanted to learn capoeira. I did not come because I needed a new metaphor for life. I came because I am a survivor of a global war on women’s bodies and minds. That war leaves deep wounds; it takes as bounty the integrity of our minds and bodies. Just like veterans who survive battle only to face years of combatting their own trauma, so survivors of gender violence must also face years of re-inhabiting the battlefields of their bodies and minds. Every day, sometimes hour by hour, I take another step on that long road out of hell and into health. One day, that step took me to the door of your school.

PTSD is many things to many people—a disorder, a scar, una vergüenza. I like to think of it as a metaphor. For love. The human brain is simply not adapted to withstand, witness, or even inflict ongoing violence. When exposed to violence, the brain reacts to protect itself and its body, not only from physical harm, but from the horror of what human beings are capable of doing to one another. When the violence does not pass, when there is no immediate escape, certain parts of the brain begin to malfunction. They can remain traumatized for years.

Down to our deepest neurological bases, we humans are adapted or designed not for war against each other but for social inclusion, physical security, emotional and creative expression. Community, respect, freedom. Love.

No metaphor can describe what PTSD is really like, but I like this one. (I also like any metaphor that compares PTSD to a mental torture device. Those ones are accurate too.)

Two weeks after arriving at your school, October 18, 2019 occurred. A day I will always remember. The day Chile woke up, rose up, and rebelled. The day Chile also (because a nation, no matter how fractured, is indivisible from its best and worst elements) scoffed, cracked down, killed. So began the last two months—at once an inspiring peaceful revolution and a nightmare of state brutality. Massive marches and an upwelling of activism, solidarity, ingenuity. Met by police shootings, torture, beatings, rape, disappearances, political apathy. Hope, unleashed, is a beautiful thing. But horror guts you, even from afar.

What was already an ordeal with PTSD—attending capoeira class—became worse once the repression installed itself in Valparaíso. I could not enjoy this metaphor for life and its battles when real people whom I love were, at that very hour, in the line of fire. They have not survived unscathed, not in body nor in mind. Yet el pueblo has been preparing for just such a revolution for decades, and many of its people are survivors of entrenched wars against their tribe, neighborhood, gender. They know they are unarmed but not defenseless. We know we are scarred but not broken. I know I am ready to watch, sing, and protect from the sidelines, because I have been in the ring for a long time, and it is no game, and it is no metaphor.

Mis queridxs capoeristxs, you are being trained for much more than a Friday night roda. You are beginning with the body—knowing yourself, honing your control, releasing your spirit—because the body is the first defense they will try to take from you. Yet did you know that, under threat of danger, the human brain’s first reaction is not fight or flight, but rather to scan and call for another human’s help? Down to our deepest neurological instincts, we humans know our greatest weapon under attack is the rushing in of a fellow human.

So we do not only train our bodies, which often fail us, but we build the traits that will serve us even better in la lucha—respect, affection, discipline, family. We sing and create music because, as Mario Benedetti wrote, “el llanto no es bastante, ni la bronca,” (weeping is not enough, nor fighting). We hug and clasp hands and look each other in the eye because that is Belonging, that is Identity, that is Hermandad. These things you are training and building up in you and amongst each other are not metaphors nor sport, but the essence of Life itself.

And such Life cannot be contained to a gym, between certain hours on certain weeknights, within a certain group of people. If you go to your school only to train and use those skills within a pastime labeled “capoeira,” then you have failed to truly become all that capoeira demands of you. You have forgotten that there are real fights out there, even wars, and that somewhere out there—perhaps as close as the person beside you—someone is scanning and calling for such a human as you to wake up, rush in, stand strong. Maybe your place is not in the ring but on the sides, singing, cheering, protecting with your presence. This too is a valid form of lucha. Remember that the drum and berimbau are portable for a reason, that the best rodas form spontaneously: not in a gym but within a circle of bodies transforming a street into a metaphor.

The Chilean people—particularly the women, youth, and indigenous people—are reclaiming their city streets with little more than their fragile bodies and fierce spirits. In response to horrific police brutality, the Chilean people are arming themselves with songs, T-shirt gas masks, community soup kitchens and gardens, mental health workshops. They are not naïve. They know what world they want to build for themselves—one built not on violence but on a renewed commitment to body, community, and earth.

This is a much broader and diffuse conflict than a single nation’s politics. The basic rights the Chilean people are risking their lives for—environmental protections, healthcare, an end to gender violence and police brutality—are also at risk here, in our city of Los Angeles. You do not have to fly to Chile, as I will soon, to take part in this revolution. Even here, in your neighborhoods, people are struggling against injustice. Let that be an inspiration for you, not a discouragement. You walk amongst survivors worthy of your respect.

When you are ready, I hope you will, collectively, use the friendships, affection, discipline, and grace you have built together to bring healing and transformation to our city. 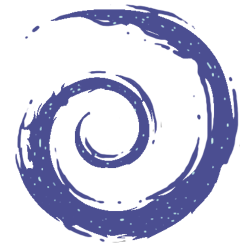 A monthly delivery of Camino Libre's adventures on the road in South America.
Follow our journey through diaries, letters, photography and more.